And so it was that Rose, lowly human and disgraced invoker, had at either side angel and demon. It was sung that Lord Baraqel, Saint of Thunder, used righteous fire to destroy Rose’s enemies. It was whispered that Lord Ishvat, the Page of Cups, poisoned Rose’s rivals with honeyed lies. Rose loved both Nobles dearly, and the love was a great comfort to him in his last terrible days as prophecy’s pawn. - The Last Testimony of Lady Khestri, Auditor of Despair.

The Twilight Throne and the Houses of Ruin is a political intrigue TTRPG of surreal magic and tragic intimacy. It uses the Forged in the Dark system (of Blades in the Dark fame) and restructures the system dramatically. You are powerful Nobles, beings of pure magic in a broken land of fairytales, serving a Throne that will be the last in an age of curses and corruption. How high will you rise before you fall?

This is a pre-order for The Twilight Throne, which will be released as a game in development. Beta 1.0 has seen extensive playtesting (50+ sessions across three playtest groups). I am offering both pre-orders and a Beta release to help cover the significant costs of development thus far, and help me continue to work on the game.  When The Twilight Throne reaches its final state, all early supporters will receive a PDF of the final game at no extra charge.

Even in it's current beta state, The Twilight Throne offers a unique TTRPG experience you can't get anywhere else.  Please note that you will need knowledge of the Forged in the Dark system to facilitate a session of The Twilight Throne.

The Twilight Throne's target release date for the Beta is Spring 2022. The current Beta version is almost text complete, I only need more time to layout the game, wait on some art, and create online play support.

The Twilight Throne is currently more than 30,000 words. It features four Thrones, seven Houses, and dozens of character creation options.

Each Throne is a story arc that guides play. The four Thrones are:

Each player character is a Noble, a magical being cursed by power. Each player chooses a House their Noble serves. The seven Houses are:

A future version of The Twilight Throne will have:

In order to download this game you must purchase it at or above the minimum price of $15 USD. You will get access to the following files when they are released:

Some kind of update would be appreciated

Hello! We've been stuck at the last section for layout, but I'm hoping to be able to finish the pages asap! I'm aiming to be done in Feb!

Apologies, I underestimated my health issues.

Any updates on this?

How do you always come up with games that have wildly different vibes yet somehow all appeal to me? Looking forward to this one so much.

Eagerly awaiting this one!

Will there be a print release some time in the future? It looks too beautiful to only have in pdf.

the long term goal is to definitely go to print, but I can't guarantee it'll look like this 😬 I've been told my layout design tends to look great digital but be bad for actual print haha!

Good news! It might not work well for print on demand, but if you do a real print run in offset it should totally work. Just look at Mörk Borg for example.

I just preordered this and am extremely excited by the idea of having the courtly intrigue and drama, without PVP (or at least that's the feeling I've got from the preview images). It's refreshing to see this mindset of working together towards something devastating.

Also it blew my minding thinking "wait a minute, is backstabbing and lack of community mindset a colonization thing???" Then I looked at my country and what Europe and the US did to it and like.... I have to sit down...

First: what themes each House addresses in colonization? (example: I saw on Actual Play Rae mentioning Clay being their feelings on History and how it's written)

Second: why is Evil Hat sleeping on this gem?? This would look sexy news to Blades in the Dark in their catalogue.

Thank you so much!! You absolutely hit the nail on the head, The Twilight Throne focuses on collaborative political intrigue and moves away from PVP. There are a lot of mechanical incentives to work together, though a few mechanics do encourage healthy competition...

Yeah I think when I started looking at culture with a colonial and post-colonial lens it was absolutely devastating! Working on The Twilight Throne has been very cathartic, while still producing a lot of rich concepts to inspire play!

I'm planning on soon addressing how each House embodies my Strong Post-Colonial Feelings, maybe through a Twitter thread or a blog post? When I do, I'll definitely reply again here and leave a link! Thank you for watching the Actual Play video!

And re: Evil Hat, it's my hope that I'll be able to work with a publisher like them! (Or even Evil Hat themselves!) Please cross your fingers and toes for this game, haha. Everyone's early interest and support definitely helps indie games find the right publishers, so thank you so much <3

Reply
dión // isle in the heavens313 days ago

I'm super intrigued by the art direction, concept and setting.

My one concern currently is that most folks I regularly play with are somewhat reluctant when it comes to trying anything but 5e — the most success I’ve had so far was with one-shots in systems with super lean rules.

Since the ‘shortest throne’ so far is laid out for at least 4 sessions and you suggest the DM has a strong familiarity with BitD, how accessible do you deem TTT to newer players? Will a future release contain tips on how to facilitate fewer/shorter, more beginner-friendly sessions?

(Honestly, you know what, I might jump the gun and get the game no matter your answer, just for the art and story inspirations 😅)

Hello! I absolutely understand, I was a D&D GM and player that had a difficult time playing anything that wasn't D&D.

I'm thinking about your concerns and off the top of my head I feel like the best way to really convince a group is to see how into the setting/idea they are, since that's usually what's required to really break a habit like D&D.

I do think that if a GM only introduces the mechanics the players need in the moment (Blades even suggests not using all the mechanics, like position and effect, in the first session) then Forged in the Dark is much easier to pick up. FitD isn't crunchy but it has a lot of optional systems and strategies that lock into place as you like, right?

That being said, why I might end up doing is creating a different game that's set in The Twilight Throne that uses a different set of rules (like Trophy Dark for example), to act as a prequel or sequel (whathaveyou!) and pull the players in that way? But I'll definitely think about what you said and take into consideration as the game further develops!

I definitely want to include advice for beginners though, for both players and GMs!

I do think that you can definitely take a lot from Twilight Throne and use it in any game. Like you can follow the Throne story arc and pick up different cool plot elements (like the House Secrets to empower the human rebellion, or the Houses themselves could feature in your game).

Apologies for the long reply, but it was a good question that I really wanted to answer as best as I could! I really appreciate your interest!

Reply
dión // isle in the heavens312 days ago

Actually, Trophy Dark is one of the games I already familiarised my folks with, so I really dig the idea of another game in that vein acting as a sort of funnel for a ‘full’ TTT experience.

I honestly just fell in love with that cover at first sight. The more I read on the more my interest was piqued, though. The pitch is definitely intriguing, and what transpires feels so flavourful that I'm really eager to see how it develops.

Hi! this sounds very interesting. What do you mean when you write that "you will need knowledge of the Forged in the Dark system to facilitate a session of The Twilight Throne."?  Does the game you are writing contains references to the mechanics   of FitD system without explaining them, so that i need the Blades in The dark manual to play ? Or it is just a " if you are familiar with this  ruleset you will  understand mine easily " ?

Thank you for asking!

Technically The Twilight Throne will cover just the absolute basics of Forged in the Dark, so some of the more in-depth things (like why Flashbacks are cool and such) won't be present.

That being said I'm thinking of adding a little more, so that folks won't have to reference two books in order to play this game! It's just a little tricky when things are still relatively in flux for the mechanics...but I'll definitely do my best! 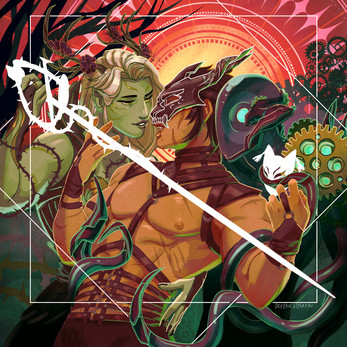