REINCARNATION REDUX: Our Requiem is inspired by the themes and narratives of Magical Girl anime.

In case it needs to be said: you don't need to be a woman to play this game, and you do not need to play a female character who changes into a magical girl.

You are, however, playing the roles of Reincarnated Soldiers, reawakening to their powers. Their memories come flooding in, disrupting their mundane lives forever. An opponent arrives, demanding battle!

This game uses tarot cards as a mechanic to tell this story.

RR:OU is meant to be played as a short but rich prologue. This will be the first of a series of games inspired by Magical Girls. This game will still offer a satisfying standalone experience.

This is the first version of the game, please expect:

This game is FREE for anyone who is part of the LGBTQIA+ community, or from a marginalized community. Please contact me through @temporalhiccup on Twitter or email me at swordqueengames@gmail.com. I will send you a copy of this game, no questions asked.

If the price of this game is a hardship to you, free community copies are available below.  In addition, significant discount for marginalized folk is on the way! In the meantime, feel free to grab a community copy if you like.

In order to download this SWORDDREAM you must purchase it at or above the minimum price of $7 USD. You will get access to the following files:

Support this SWORDDREAM at or above a special price point to receive something exclusive.

This is a transcript of a twitter thread I made, praising this game!

Reincarnation Redux  by  @temporalhiccup is a game of dying and rising anew from the ashes.

It uses a tarot deck to guide the narrative. I've always been a little cautious of tarot games, because to those who use them, they are a font of meaning, but to those unfamiliar with them (like me) they are a little opaque. I know the creator is a Tarot reader and shaman, so going in I was concerned that their use might be a little opaque.

Initially, they are used in character creation, and the text defines the meanings of the cards for the purposes of the game. I love this: The suits are related to character traits like hard-working, steadfast. The Major Arcana (the scary bits for me) are not used.

Future card draws are used to produce future phases.This part does use the 'use the imagery for inspiration' bit for the Major Arcana that I'm a little anxious about, but it's a small part of the game; I feel less intimidated here by the Tarot than I have been previously.

These card draws purpose vary by phase, meaning the characters progress through a fairly linear story: They remember who they've been, they meet each other and their enemy, they transform, and they develop a power.

For each character trait, these draws have a different result, and each of these results will combine in a way that is really interesting and will make each character's progress unique, especially taking into account their own interpretations of the words and imagery.

Of course, the magic girls defeat the enemy, and a point system is used to look at the consequences of the battle that they have waged, and you choose their future.

Alright: So this is a pretty great game, and it makes curious to look at more Tarot games (although the aesthete in me wants a very specific set of monochrome goth tarot that probably doesn't exist).

What I really like is that it adheres very strictly to the narrative tropes of the genre, but has tons of potential for character exploration within those lines.

You can think of it as an experiment in giving very specific transformative internal agency to the players; the structure and the use of the Tarot reflects the themes of the game. This is what mechanics in games are for.

This game, then, is the perfect version of what it tries to be. Thanks  @temporalhiccup   for a lovely game, and for opening my eyes. Everyone, buy this game. Five stars :). 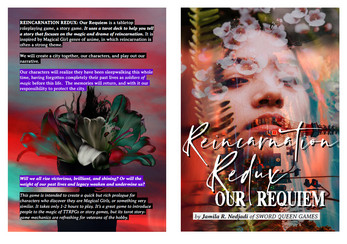 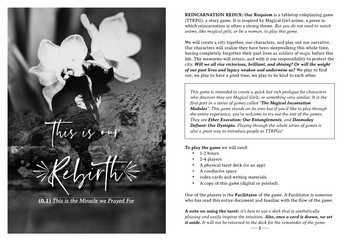 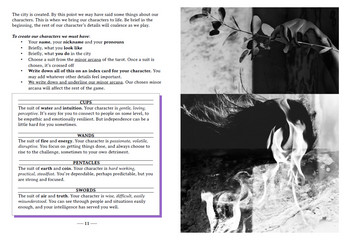 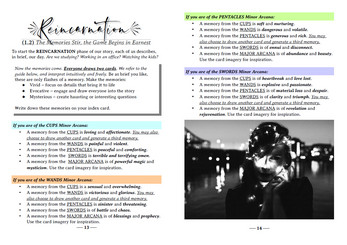