Cats spend most of their time sleeping. Dreaming. Training. And the very best become Feline Dream-o-naughts! And you were one of them! In one of your previous nine lives you were part of the neighborhood night watch. Serving the community of cats, you delved fearlessly into human dreams in order to extract or deliver important information. You were heroes!

But some time ago, all Dream-o-naughts were outlawed. The watch was quietly disbanded and sworn to secrecy. The art of walking through human dreams was lost fur-ever. Lives passed. The legacy of the dream-o-naughts faded.

But tonight, someone calls out for your help! The dream-o-naughts are needed to save the night! Your skills are needed one last time...do you still have what it takes? Can you still travel THE MEME STREETS and get the job done?

FELINE DREAM-O-NAUGHTS AND THE GREAT CAT NAP! is a PbtA game. It is heavily inspired by Dream Askew and Henshin! and makes use of a similar mechanics (map drawing, token exchanges between weak and strong moves, no dice).

Errand for Endle is a two page adventure is for D&D Fifth edition, but I used Feline Dream-O-Naughts. To solo it I used a solo engine that I have been testing out. I used four cats which were in the dream of a man. In this adventure, the questing man did a bit of walking, talking, and carrying things for the cats. He was a bit confused (the cats were talking after all). On day one they picked up a quest from Farmer John. He wanted a fox to be killed. The questing man built a fox trap with the help of the cats. The trap caught Grump Cat. They released him. On the second day, this same trap caught a two pound rat. They killed it and they then discarded this quest. On the third day they encountered an invisible wall across the road. They climbed trees to get over it. Later, they received a quest and food from Farmer Endle. Next, they encountered a young wolf. They bribed it with food and made a pet out of it. During the last half of the adventure they had to fight two rats, two stirges, and the big climax was the battle with the dire rat. It did kill Chonk the Cat. Good times! Give it a try! 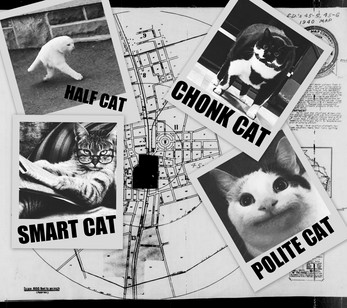