It is the far future. Earth has been abandoned for generations. Humanity left for brighter stars, richer planets and shining colonies. To fuel their dreams of a better tomorrow, the humans turned to the Elementals and their magic. This magic is an invaluable source of power and labor. Machines were created to harness and enslave the Elementals .

You were one of these Enslaved Elementals. You are machines that echo the legendary magic you once possessed. You and your friends are among the few who have managed to return to Earth. What remains of Earth’s cities is falling apart. The Corp won’t let go of you so easily either. But shining through the cracks is a magic that is ready to be reborn.

Can you outrun The Corp long enough and bring forth the Rebirth of magic? Will you survive this revolution you’ve started, or will The Corp recapture you? We play the game of BALIKBAYAN: RETURNING HOME to find out.

BALIKBAYAN is great for veterans ready for a more narrative experience, and perfect for people new to the hobby. Bring your dystopic post-Cyberpunk fantasies to life, revel in supernatural Filipino folklore, and dance along the threads between magic and technology.

If the price of this game is a hardship to you, free community copies are available below!

In order to download this roleplaying game you must purchase it at or above the minimum price of $10 USD. You will get access to the following files:

Support this roleplaying game at or above a special price point to receive something exclusive.

That game is mind blowing! I'm currently listening to the Asian Represents stream of Balikbayan and MC-ing quite a long campaign for my polish gamin group. And they are LOVING IT.

I have a couple questions though:

1. A lot of the elemental magic descriptions have consequences and hard choices included. I understand they are there for the neutral moves only, yep?

2. You had an fantastical character keeper in your game with Actual Play <3. Is there any chance you can share with us one of those? :)

3. During Asian Represents stream you were using some world building mechanics that aren't present in the BETA version of the game (spending tokens to unlock setting elements). Are those only for Patrons or can anyone who'd bought the game upgrade their version to the newest one?

4. Are there any plans for the final version in the upcoming months?

Keep up the amazing work! Greetings from Poland :)

I'm currently watching Actual Play Ep.1 of this game and really loving what you did on combining elements from Cyberpunk and Filipino folklore. I haven't any idea on how to play yet as I've no experience in D&D and such, but I'm really interested on how and hopefully I can find a group to play with.

BALIKBAYAN by Jamila R. Nedjadi is an amazing Belong Outside Belonging hack, which can be played with or without a GM. In it, you play as enslaved elementals, magical machines who want to free themselves from the corp. The writing of this game is evocative and the design is breath taking! It tells stories of folks who tries to free themselves from the shackles of colonialism and capitalism, and you can't get more cyberpunk than this. I cannot recommend it highly enough!

Good point concerning advices to take care about the emotional security of the players and the game master !

I was watching your Actual Play with Sean Nittner and was wondering if that Character Keeper is available for use? I loved the lines/veils tab.

Hi Christo! Absolutely, I'm planning on including it here and will add the Character Keeper this month ❤️ Thank you for asking!

Excellent! That was one of the best ways I've seen lines/veils used.

Interested in the character keeper too! Planning on running a game soon and it looks like it would make everything soooooo much easier.

Absolutely! will drop a comment here when the character keeper's up!

Any update on the CK? I've been holding off starting a game until it's available. I saw it is available on your other game, Apocalypse Keys, thanks!

Is there any plan to make this available in physical format?

Absolutely! It will be a while yet because I'm still actively playtesting and working on this game tho ❤️

BALIKBAYAN is definitely one of my new favorite cyberpunk games.

It's 33 pages, mostly black-and-white, GM'd or GMless, and very narrative-focused.

It's also visually garish. Everything is laid out clearly on the page, but there's a riotous amount of contrast. And I think maybe any other game might have fumbled this approach, but with BALIKBAYAN it just forces you to pay attention.

Plotwise, BALIKBAYAN feels like Blade Runner, but seen from the perspective of the replicants---and with the caveat that the replicants are literal ghosts in the machine---elementals that have been confined and repurposed to power human technology. The writing is lovely and punchy, and there's no shortage of atmosphere and flavor. It also deeply enmeshes cyberpunk with the supernatural, on a level that I don't think I've seen another game manage to achieve (including SR and BloodNet and stuff like that.)

BALIKBAYAN's mechanics are a thing folks might bounce off of, because they're Belonging Outside Belonging, which makes BALIKBAYAN a rare non-crunch cyberpunk game. However, BALIKBAYAN also works in an overarching narrative system, where actions in the game tick boxes on Reckoning/Homecoming tracks, which both trigger responses from the fiction, and move the game towards a clear end-state.

Again, it's not crunch, but it is a really cool mechanical element, and it keeps the story both anchored and always moving forward.

Overall, I would strongly recommend this to anyone who likes flavor and atmosphere, narrative games, and the supernatural.

-page 26, Use your magic with, "by paying a token you the choice is easier" extra 'you'

-page 30, Weak Question, this feels a little like it wants its own section. At minimum, it might benefit from an example of what a typical weak question is, especially for folks that haven't played or read Belonging Outside Belonging games before and don't quite have an intuitive sense of how this element should work.

Thank you so much for taking the time to write such thorough and well written feedback! BALIKBAYAN is undergoing some major playtesting so I appreciate any insight that can help the game be easier to pick up and play ❤️

It's a really cool game. Thank you for writing it!

We just did Character Creation and World-building so far and I am already in love with this game. Can't wait to get into it from the characters perspective.

I'm so happy to hear that! I'm glad the world of BALIKBAYAN is really vibing with you :D

Oh my god i was just saying i wished more creative stories about the Philippines should be out there! I'm so excited to play this!

heck yeah we need more Filipino stories out there! Thanks for checking out the game 💜✨⚡

Cyberpunk? Mythology from my family's homeland? YES! Two of my favorite things in one. Thank you so much for this. <3 #RepresentationMatters

Thank you! Yes, representation absolutely matters! I hope you enjoy the game~

This is a great blend of a lot of great things: Cyberpunk and magic could seem like odd fits, and adding Flipino lore on top of that is risky, yet it works perfectly here. The little tweaks on the "Belonging Outside Belonging" system are very clever, and I really appreciated the commentary about removing or adding a GM to the game. An excellent game through and through!

Thank you so much! I was inspired by Shadowrun and how magic and technology existed in the setting, but I wanted to blend the two into a more cohesive whole...

I appreciate you taking the time to leave a comment, thank you so much!

I've GMed Balikbayan having absolute zero knowledge about Filipino mythology, same for my players. And our game session was awesome! The rulebook tells you everything you need to know, so it didn't feel like another urban mystery game to us! We definitely got the vibes from our City generating and from the disussion of available playbooks.

The need to use weak moves in order to gain access for strong ones was perfect for building tension: how would other characters see an Aswang who has shown their weakness to them, revealing they aren't a perfect hunter after all? Will other Elementals trust the Saint who risked it all letting a Smaller god inside them?

We all liked the game very much! Thank you!

Aaaaaaaah I'm so glad! This was absolutely the intention behind the design of the came and I'm so glad it came across. I always love the Aswang-Saint combination in a game ❤️❤️❤️ thank you for playing!

Hi Jamila! I’m really excited to play this game and I have been reaching out to my RPG groups to find a good DM for it. Do you know any good RPG communities with great diversity I could join that are playing this system? I bought a copy and will run it myself but I want to support POC gamers and DMs and have them be part of our community. I want to hear their voices and stories.

Thanks so much for picking up the game! Unfortunately I too am still on the look out for an RPG group with a high number of POC gamers and GMs :(

I currently play on The Gauntlet a lot, and there's a small number of PoC in the community, and hopefully we'll grow in time! https://www.gauntlet-rpg.com/

V3 is also doing great stuff but the community is only BIMPOC,but you may want to find out how to support them: https://www.vibrantvisiblevictorious.com/

Thank you for these links! I will check out these groups and imbibe their glorious contents!

Oh! Speaking of content, I really enjoyed watching the content you streamed on YT for Balikbayan. It was entertaining and helped me get a feel for the system!

Reply
Games by Mitch2 years ago

I love cyberpunk mythic fantasy and magic, and this game delivers in spades. Plus, the layout and art are gorgeous. It's even exciting to read.

(please note that I claimed one of the community copies because I purchased the game at full price at the last Big Bad Con in Walnut Creek.)

Absolutely! Thank you so much for grabbing the zine! I will add another copy for the community to reflect you supporting the zine ❤️

Reply
Ember and Ash3 years ago

I’ve been quite fond of Shadowrun and its blend of magic and neon-futurism for a long time. But the rules are cumbersome and it isn’t really Punk.

Balikbayan is the game I want Shadowrun to be. The rules are simple to use but allow a lot of depth in player choice and character design. There is a strong tension between restoring magic or being captured that is not in direct opposition. And it is thoroughly based in a culture, rather than being so generic. A stunning game, both in its rules and it’s presentation. 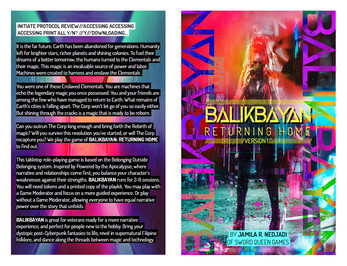 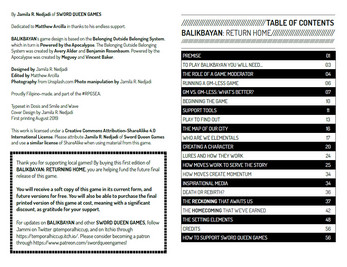 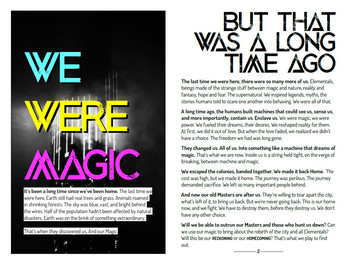 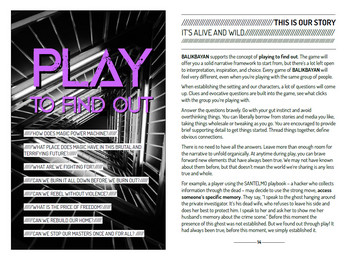 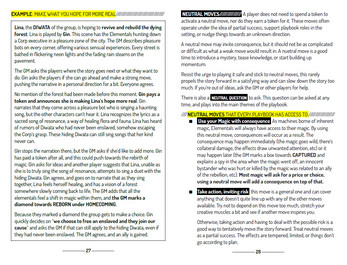 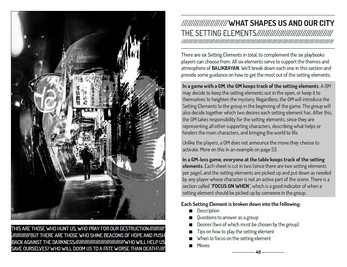 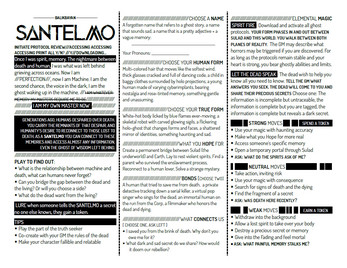 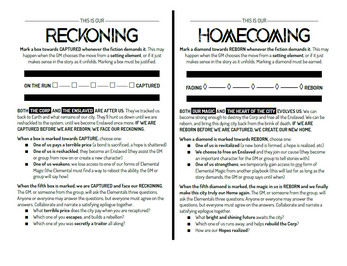 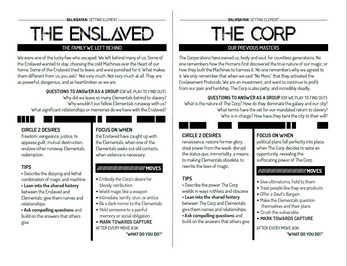